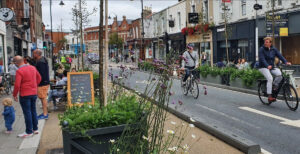 Reopening Blackrock for All

We need your Feedback!

It has been some months now since work was completed on the re-configuration of Blackrock Village. Since then, many of us will have had an opportunity over the summer months to experience the new layout on Main Street. The increase in footfall has brought a renewed energy and vitality to the Village.

Now that the new configuration has been in place for a few months, we want to follow up and ask you what you think?  Please take a few minutes to answer the questionnaire below and let us have your feedback (it is a very short questionnaire and will only take 2-3 mins to complete).

Your feedback and views are really important.  Please click below to complete a few simple but important questions.

As a result of the street changes, Blackrock Village has received much positive attention and praise from across the country, with many villages looking to replicate what we have achieved in our village.  Indeed, you may have seen Blackrock Village singled out for praise by famous Olympic cyclist Chris Boardman (near the end of the linked video) in a recent TV programme.  See https://twitter.com/i/status/1305793410926882816

Hatch has officially opened its new branch in Blackrock. Its original coffee shop is in Glasthule, and Hatch now adds to the growing list of quality coffee shops on Blackrock Main Street.

Following his success with Ciamei in Blackrock Market, Claudio has now also opened Mina, a wine bar and bistro, on Main Street.

The test case has clarified that the Covid-19 pandemic, the Government and public response were a single cause of the covered business interruption loss, which is a key requirement for claims to be paid even if the policy provides cover.  The overall thrust of the judgment was in favour of interpreting clauses in favour of the policy holder. Each case will turn on its own particular wording within the insurance policy but a great number should be covered by the 21 sample wordings considered in the Proceedings.

While the case has no binding authority in Ireland it is of persuasive authority and will certainly be considered by the Irish Courts.

A lot of traffic light control boxes have recently been repainted in the County by local artists as part of the #DublinCanvas public art project.  Have you seen the above creation at the Merrion Avenue entrance to Blackrock Park?  Dublin Canvas is a community art project intended to bring flashes of colour and creativity to everyday objects in the greater County Dublin area. Less grey, more play! The project takes previously unused public space and transforms it into canvases to help brighten up each area.